You are here: Home1 / NEWS2 / The Great Turning: Embracing Agroecology in India 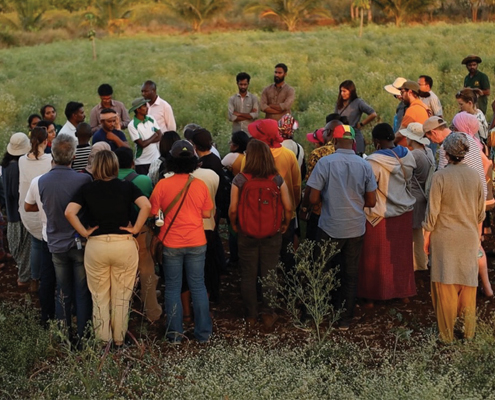 In early February, The AgroEcology Fund brought 28 of the collaboratives it has supported together in Bengaluru, India. ABN Secretariat’s SIMON MITAMBO attended on behalf of a current collaboration of ABN partners. He shares his story.

In the village of Ugrapalli, deep in the Anantapur district in India, I visited a vibrant group of farmers who told me that the whole village was practising natural farming or agroecology. This was amazing and fabulous, probably the best news to start the new decade with. I could not stop thinking how difficult it is back home in Kenya to convince farmers to stop using chemical farming and genetic engineered seeds, despite complex health issues associated with this farming compared with natural farming or agroecology. Agroecology is a farming method that takes into account the health of nature – soil, ecosystems, water and the entire landscapes. The farmers I met were well animated, organized and socially integrated. They lined up to give us flowers as a symbol of great welcome to their village. It was a momentous experience for me to have the opportunity to listen to them telling their story, a sad story of how the chemical farming (the Green Revolution) devastated their livelihoods and the entire ecosystem. They said the chemical farming was input intensive, techno-centric and resource-guzzling. It was imperative that they abandon this in favour of healthier natural farming which they have now been practising for the last five years.

My visit was part of a ten-day Global Learning Exchange organized by the Agroecology Fund. The exchange brought together more than 100 participants from across the globe – Africa, Asia, Europe and the Americas. Participants included members of civil society groups, farmers, researchers, donors, policy makers and media. We had a great week of learning and reflecting and going deep into issues.

Hearing from farmers
A significant part of the ten-days was spending time in the field. The farmers we visited took us round their farms where they had planted more than twenty varieties of crops. I saw millet, pigeon peas, pea beans, cowpeas, green grams, chickpeas, groundnuts, maize, mangoes, okra, sorghum, pepper, tamarind, castor seeds, coconut, sesbania, moringa and more.

The diversity of crops in this community was wonderfully demonstrated by the colourful seed circle that the women of the village constructed. The outer layer consisted of pulses and oil seeds, while in the inner circle lay the diversity of millet and sorghum related varieties. These farmers stood out as an example of a community of practice where agroecology is working at its best. Asked why they turned their backs on chemical farming in favour of natural farming, they told us that the chemical farming had given them a lot of distress. The prices of fertilizers, seeds and pesticides meant that farmers had to take loans they couldn’t final afford to repay. We met a widow whose husband had committed suicide because of these loans. They said that there was also a rise in ailments such as renal failure, stillborn babies and birth defects that researchers attributed to the overuse and misuse of pesticides and herbicides. Widespread contamination of drinking water with pesticide chemicals and heavy metals was leading to cancer cases and other life-threatening diseases. The chemical farming was degrading their soils, decreasing biodiversity and polluting their air and water. We asked one of the farmers what he felt about yields and productivity. He quipped, “what do you achieve by feeding people at the cost of their health?” With natural farming, they were able to regain the health of their families, increase food diversity which lead to improved nutritional value. They also told us how the Pethai and Titli cyclones of 2018 had a greater negative impact on the paddy fields that were using chemical farming compared to those using natural farming; demonstrating greater resilience of the latter.

Since moving away from chemical farming, the farmers confirmed that the quality of their soil had gone up. This created a soil carbon sponge. In the 3-year transitioning period from chemical to natural, the farmers said that the harvest remained the same though the income went up because they were using their own natural inputs which they did not have to purchase. To control parasitic insects, they are using cow manure mixed with urine, soured milk, garlic, chilies and the leaves of neem to ward off pests.

Recognition of India’s Natural Farming
India is using “Zero Budget” Natural Farming (ZBNF), also known as Community Managed Natural Farming as a form of agroecology. The Indian government has plans to make the natural farming a national program. Vijay Kumar is one of the key architects of this program which currently enlists six million farmers working on eight million hectares of land. The success of this program is founded on four pillars: government support; indigenous and local knowledge system; extension services; and ownership by women farmers organized around self-help groups.  And although not everyone supports ZBNF, the program is receiving recognition far and wide. The UN General Assembly discussed ZBNF as a case study for South-South collaboration in September 2018. The Paris Peace Forum selected ZBNF as one of the top 10 projects that will receive scaling up support. The model was also showcased by UN Climate Change Summit in September 2019. In the same month, the UN Convention to Combat Desertification invited the Minister for Andhra Pradesh to share insights on ZBNF. The UN Agencies (WFP, UNEP, CBD, WHO, IFAD, FAO, UNDEP) jointly approved the scaling up of Agroecology Initiative work plan for 2019-2020. Mexico, Senegal and India were selected for the first phase of implementation. The recognition of natural farming at national and international level demonstrates that natural farming is the way to go. Chemical farming is clearly causing damage. It is putting lives of people and ecosystems at risk.

Where to from here?
Coming back home from India, it felt like I was carrying a great basket of goodies: ideas that illuminate hope for Kenya and Africa at large. It was great meeting the community of Ugrapalli in Anantapur district. The community are a true inspiration in terms of how they are taking charge of their lives and livelihoods. As Margaret Mead has said, “never doubt that a small group of thoughtful, committed, citizens can change the world. Indeed, it is the only thing that ever has.” Yes indeed, we left inspired and changed.

Photos for this piece were taken by Rucha Chitnis, an independent photojournalist, and long time ABN ally and friend John Wilson, who attended the gathering. To see more pictures, please take a look at Rucha’s photo story. 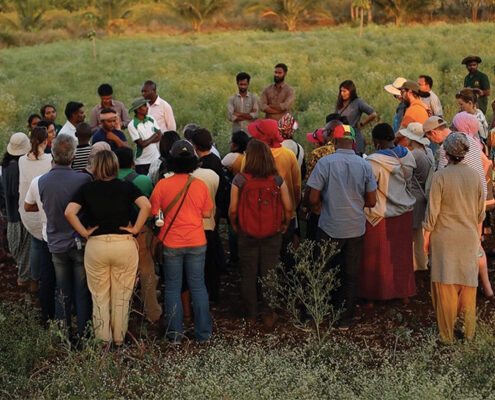 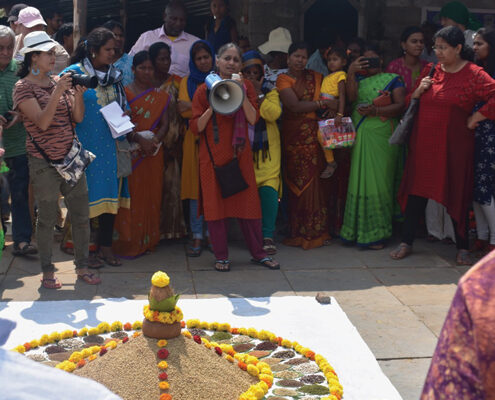 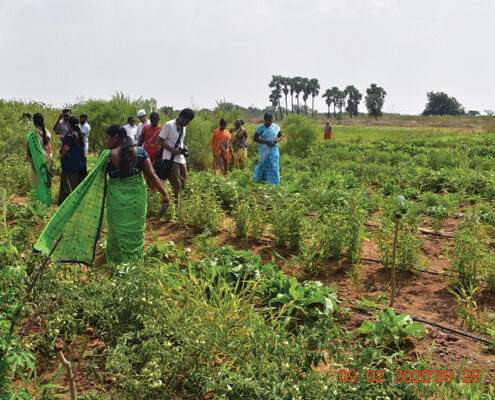 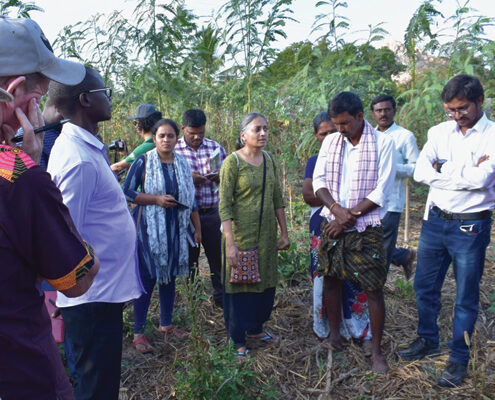 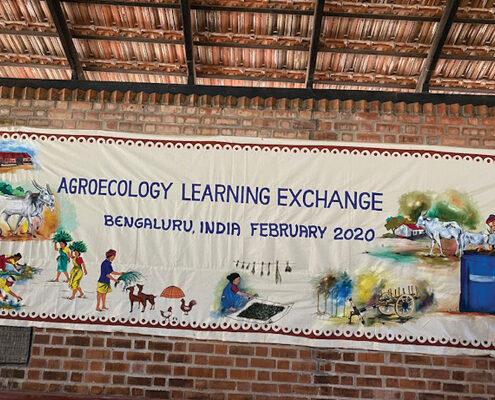 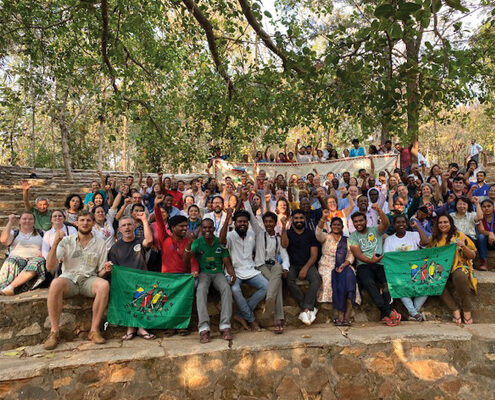