You are here: Home1 / NEWS2 / Recognition for our partner in Benin 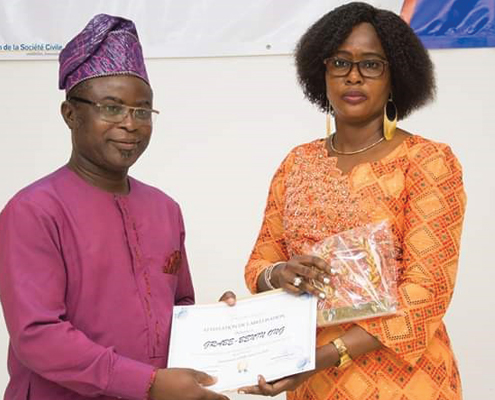 We are delighted to announce that our long-standing partner GRABE-BENIN ONG has been awarded a certificate of labeling, an important accolade for an NGO operating in the West African country.  This recognises its actions and achievements on the ground and throughout the country, and builds its credibility, its professionalism and the good quality of its governance.  It is an award bestowed upon NGOs by the House of Civil Society of Benin (MdSC) with the support of Swiss Cooperation and the French Embassy. For the last two years, the award has labeled those who do professional work and who have real impact on communities with good governance. The certificate and trophy were received by GRABE-BENIN’s president Appolinaire Oussou Lio from the Representative of the Minister of Justice, on 27 February. GRABE-BENIN ONG is one of seven NGOs in Benin to have been awarded the honour this year.

Speaking about the work of his organisation, Appolinaire Oussou Lio says, “Agroecological practices and the conservation of sacred forests and sites are essential in the protection of biodiversity. We must rely on the endogenous knowledge of dignitaries and women with the involvement of the rising generation.”

GRABE-BENIN is a non-profit association born from the will of a group of citizens committed to the promotion of sustainable development with the objective of transmitting environmental awareness to populations and promoting well-being for all. It is committed to protecting the environment through the promotion of traditional knowledge. It has supported indigenous and local communities for the past twenty years in the protection of sacred natural sites. In addition, they have a long tradition of working with women keepers of traditional seed knowledge as well as farmers’ organisations. To promote intergenerational dialogue, it is committed to creating a framework for exchange between young people and adults through environmental education through experience as well as the creation and animation of youth clubs. As part of their support for community actions for reforestation, the restoration of the critical ecosystems for mitigating the impact of climate change, has led to several initiatives.

The participatory methodologies promoted by ABN are used by GRABE-BENIN in its various activities through Community Ecological Governance, SEED and Youth and Cultural Biodiversity. 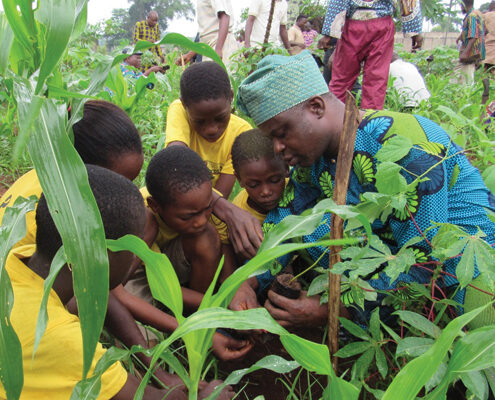 The Great Turning: Embracing Agroecology in India
Scroll to top