You are here: Home1 / NEWS2 / Chikukwa, an island of hope in the face of extreme climate events

Landscape of the rubble after the cyclone 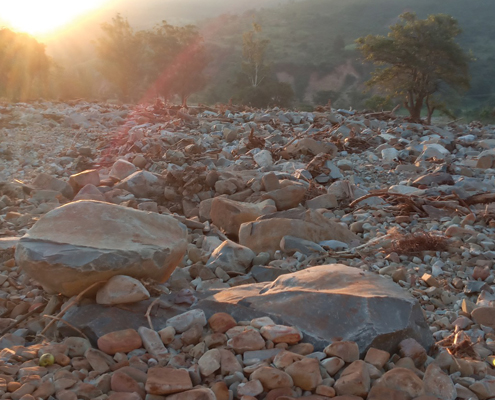 A year has passed since the villages of Chikukwa in the eastern mountains of Zimbabwe were hit by Cyclone Idai, a weather event that saw the whole Chimanimani district ravaged. Chester Chituwu, director of ABN’s partner CELUCT reports.

Things will never be the same again in this small but compact community of six villages[1] nestled in the Chimanimani mountains. The cyclone, in addition to taking lives, took a toll on the entire landscape, ranging from the cropping areas, water sources and protected sacred natural sites. Lives were lost, crops in the fields were lost, livestock were lost and granaries which stored food and seed reserves were lost.

This is the community in which the Chikukwa Ecological Land Use Community Trust (CELUCT) was born in 1991. It is a community that, through our work, has been exposed to permaculture and agroecology for almost thirty years. There is a general understanding within the Chikukwa community that people are a part of the ecosystem and as such, their actions and way of life is in good relationship with the land. This can be evidenced by the care and respect for the soils, water, landscapes and the environment. CELUCT has accompanied the community in this journey and facilitated them to draw their learnings from the wisdom enshrined in their indigenous knowledge systems. CELUCT is conscious that the community holds vast knowledge within it and hence dialogues and the Permachikoro (Permaculture School) have been supported to enable farmer to farmer learning.

It is with this understanding that some 80% of the community has been actively involved in agroecology. This includes saving their own seeds, for planting but also as they relate to their way of life through their rituals and what they hold as sacred. The cyclone in March 2019 came like a test on the resilience building that the community has been engaged in. For CELUCT and the community, the cyclone was a direct challenge to evaluate and see what impact the cyclone had on our work around agroecology. It has spurred us on to do even more.

And so, a year after the cyclone, we want to share with you some of our observations and lessons learnt with regard to our resilience.

Permaculture and agroecology encourage the development of land use designs to ensure that the land/soil, water, environment, livestock and peoples’ needs are met, and their inter-relationships maintained. Many community members across Chikukwa had adopted water harvesting techniques such as swales and planting vetiver grass to hold the soils in their cropping areas. When we assessed the effects of the cyclone, most of the fields in which water harvesting techniques had been used were spared or saw less damage. The deluge of water that the cyclone brought was worse for those farmers who were not harvesting water. It took all the topsoil and destroyed some domestic water sources, leaving a trail of deep gullies with huge piles of stones. For our work in the agroecology movement, it helped to convince those that were sitting on the fence about the practices. This was a wake-up call to the community to take water harvesting seriously.

The intercropping done in some fields enabled those farmers to harvest at least one or two crops as the excessive rains affected some crops. Thus, those who were monocropping had a very poor harvest, particularly from maize. Most farmers were not able to get enough farmer saved seeds from the fields as some of their targeted seed fields were affected

Before the cyclone, it was already becoming evident that the grass and water levels were improving through our work in holistic grazing management. In these grazing areas, the cyclone did not wash off the soils nor did it cause landslides. Small patches were affected where the grass was still to recover. Although some farmers lost some of their small and large livestock, this was of low magnitude.

Post Cyclone activities
It is now more than a year after the cyclone. How has the community responded and what has been the lessons learnt? The Permaculture Club Committee has become more active. This committee is made up of one representative from each of the villages, one extension officer from the Ministry of Agriculture and one representative of the traditional leaders. The club has a membership of over a thousand households. The club has sub-committees at each village that specifically looks at village level needs. This way there is more community ownership of all that goes on in the village. Since the cyclone, the committee is holding more frequent meetings of its own and for the community to come up with what needs to be done and to plan, implement, monitor and evaluate their activities.

Farmers have become more actively involved in coming up with a map of their homesteads and cropping areas so that they have a clear plan of the designs that they want to achieve. Eco-mapping has become important to determine what was there, what is there and what should be there.

Chikukwa farmers have realised that agroecology practices are more resilient to adverse weather patterns. As a result, more farmers are becoming involved in agroecology practices. This can be  evidenced by the work that farmers are now doing on the ground. The practice that quickly comes to their mind is how to harvest or contain the water so that when it comes next, it does not run off and sweep the soils away. The digging of swales has become prominent as the land in Chikukwa is full of slopes and water, if not checked, can easily run off and swiftly too. Too much water over ground is a dangerous thing. The use of A-frames to peg swales in cropping areas is becoming widespread. The farmers are organizing themselves into groups to take turns to dig swales at each other’s fields.

CELUCT has also been encouraging farmers to concentrate on their home gardens, which provide the bulk of daily basic needs for nutritious family consumption.

Community leaders and elders now have regular dialogues on various issues. Among the issues discussed are leadership responsibilities towards the care of Nature. It is becoming increasingly clear that the community elders and leadership have to assume more responsibility and accountability to their people, environment and ecology if their communities are to survive into the future. Thus, ecological governance, seed knowledge and cultural knowledge and identity (indigenous knowledge) are becoming more and more relevant.

Questions arising after the Cyclone
As we continue to move on after the cyclone, we need to look at where we are scoring and where we are not. We need to reflect on how empowered and accountable Chikukwa communities are for their own actions in ensuring a resilient ecological system, especially for future generations. We need to keep asking ourselves some of the following questions. Are our current agroecology practices adequately able to address challenges brought by cyclones? What do we need to change in our agroecology practices to make it more effective, robust and resilient? How can we scale up agroecology in the face of industrial agriculture being promoted through the government systems by input handouts and extension officers? And how can communities take control of their own ecosystems and be accountable for their preservation and upkeep? There is no doubt that our lands will again be visited by similarly extreme weather patterns. It is vital that we continue our work in Chikukwa, accompanying them as they become ever more resilient.

CELUCT is a part of a larger research looking at the impacts of Cyclone Idai on the wider Chimanimani district, led by its sister organisation, TSURO Trust. The results of this work will be published later this year. 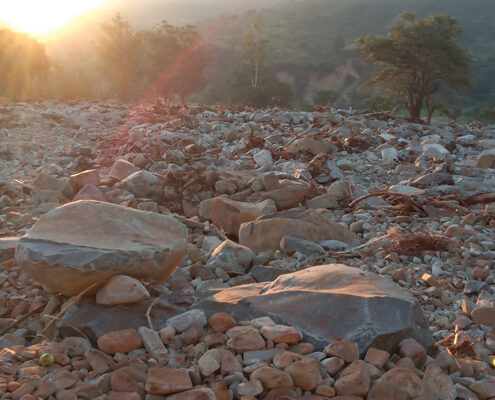 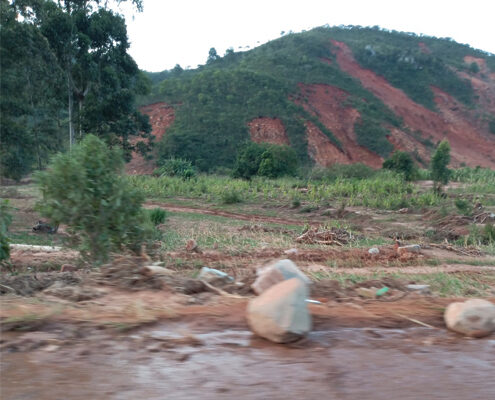 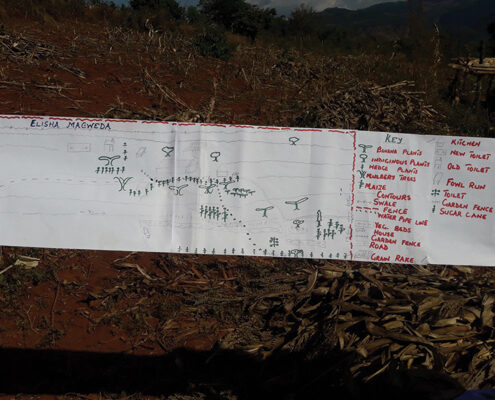 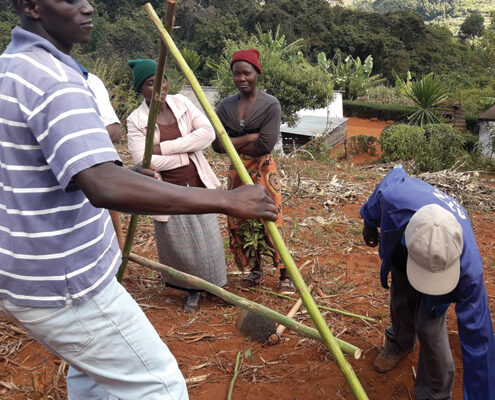 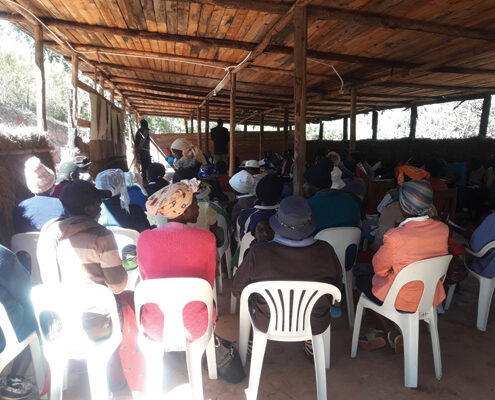 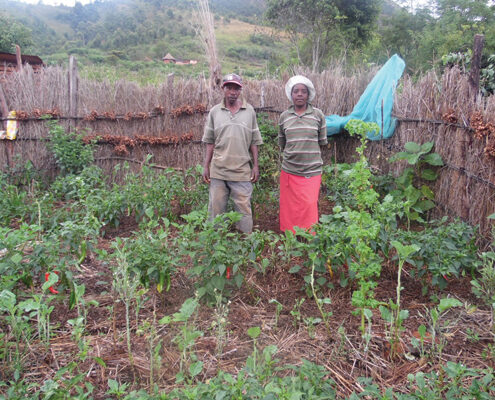 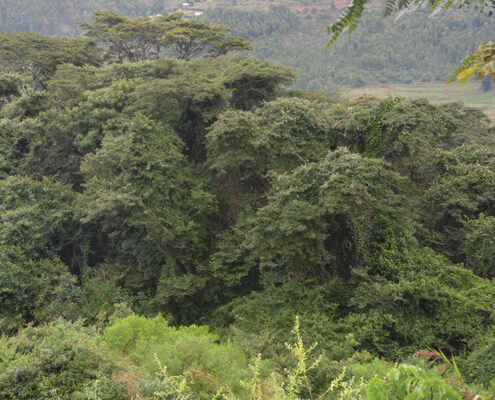 Towards biodiversity advocacy in Africa

Recognition for our partner in Benin
Scroll to top