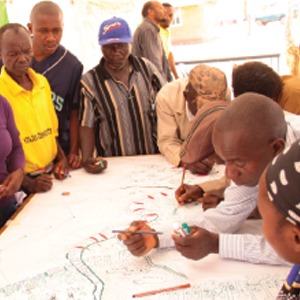 Sacred Natural Sites and Territories (SNS&T) are critical places within ecosystems, such as forests, mountains, rivers and sources of water, which are of ecological, cultural and spiritual importance. SNS&T harbour critical ecosystems and thus securing their legal recognition and respect is very critical at this stage when we are entering the 6th phase of biodiversity extinction.

The Process:
Securing legal recognition of SNS&T starts with reviving traditional knowledge of the role of SNS&T in the community and the value to culture and biodiversity. We create conditions for learning through community dialogues that rekindle the processes of intergenerational learning and increasing social cohesion. Community dialogues bring on board a mixture of young people and knowledgeable elders (both men and women) to dialogue around issues of concern for their bio-cultural diversity loss.

To analyse their territory, community members draw three maps – past, present and the future. The past map shows how the territory was before the bio-cultural diversity loss. The present map shows the extent to which bio-cultural diversity has been lost; usually as a result of human action. The future map shows the envisaged picture of how they can turn their future to look like. They use the maps and the documented customary laws to lobby the government and policy makers at all levels to pass laws that protect SNS&T and recognise the rights of their traditional custodians in restoring the original law. For instance, the resolution 372 of the African Commission on Human and Peoples’ Rights is a product of this endeavour.

Challenges and lessons learnt:
Legal recognition of SNS&T requires intense community dialogues to remember and revive memories to be able to analyse and inform the community demands. We have learnt that the nexus between spirituality and conservation is key to building new constituencies for change, and to adopt policies that call for the protection of SNS&T.

Biodiversity as the key to food security