You are here: Home1 / NEWS2 / The big ritual ceremony 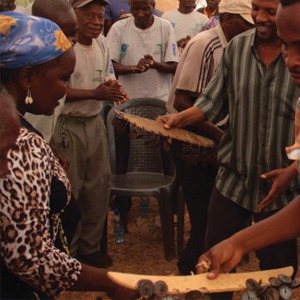 The big ritual ceremony at the Nkunguru Sacred Natural Site by the Kithuri clan, Tharaka South. It was during the Muratho season in Tharaka when elders from the Kithuri clan conducted a ceremony known as Kuragira Mburi, literally, “killing a goat”. This ceremony is directed at cleansing a particular Sacred Natural Site that has been desecrated; else, an individual, family or clan can experience calamities such as sickness, death, drought and famines.

Muratho is a Kitharaka word that means ‘start’ – in the sense of the beginning of new life – as it marks the beginning of a new year in the Tharaka community calendar. In the Gregorian calendar, it falls in the month of October. Kithuri clan is popularly known in Tharaka as the clan of the spiritual priest who brought people from Mboa, the original home where they had been held captive by their enemies, the Nguu Ntuune (literally, the red coloured people).

On the material day, six elders from the Kithuri clan went up the rocky Nkunguru Sacred Hill to conduct the cleansing ceremony. Certain caterpillars were eating and destroying their crops and which could not be killed by even the strongest pesticides. Prior to the ritual ceremony, the elders discovered that a man called Gakabu wa Karere wa Mainda from Kanjogu clan had let fire destroy the Nkunguru Sacred Natural Site. The caterpillar invasion was deemed to be a result of this. Gakabu was required to contribute a goat for the ritual ceremony.

The goat was presented to the elders who had to bring back order. On the material day, six of them gathered at their meeting point in readiness for the ceremony. The elders were few because the process of doing ritual at the Sacred Natural Site is a stringent one and requires adherence to certain dos and don’ts. One of these being to abstain from sex for eight days – four days before, in preparation for the ceremony, and another four days after the ritual ceremony. Further, the elder who is allowed to conduct the ritual ceremony should come from a particular family within the larger clan. In this case, it was M’Kanamba wa M’Gitonga. This custodian is usually very knowledgeable on matters of the community ecological governance system around the Sacred Natural Sites and Territories (SNS&T).

The clan has already done a ritual at Nkunguru, though they are yet to do one at Mwambia. They see Sacred Natural Sites as operating as a network. It is until they have done a ritual at the remaining Mwambia Sacred Natural Site that they feel things will be well for the community. The other Sacred Natural Site in the network for the Kithuri clan is Kamacundu. This is a peculiar one as the elders never conduct rituals there. Instead, the Sacred Natural Site does its own ritual for cleansing itself. It does this by taking action against whoever desecrates it. It can kill and punish on its own when desecrated unlike the others. After the rituals, everyone will be at peace, there will be a social healing process with the past, living and future generations. By doing so, they will have become accountable to all these generations.

Each clan has its own Sacred Natural Sites with its own governance system around how they conduct ritual ceremonies on these sites. These ritual ceremonies remain as something that requires deeper community dialogues that will take time for the different clans. Those ahead like the Kithuri clan remain as an inspiration to the others. By having the rituals, we revive biodiversity and social regeneration.