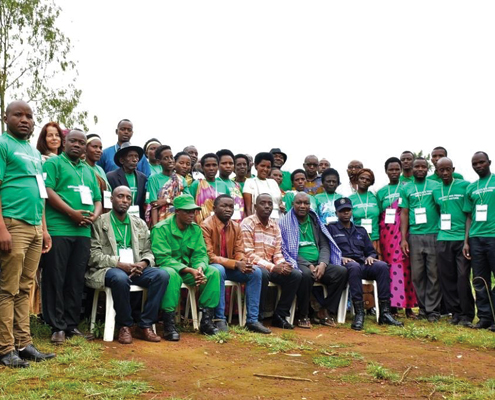 ABN’s year began with a week-long trip in January to Rwanda with five collaborating partners on a project funded by the Agro-ecology Fund. Rwandan partner GER’s Executive Director, INNOCENT MUSORE shares his experience.

My organisation was pleased to host the ABN and our partners working together on a one-year project entitled “Connecting Seeds, Culture and Nature to Strengthen Agroecological Practices and Food Sovereignty in Africa”. We had an exciting time together that included training on ABN methodologies such as community dialogues, sharing research on indigenous seeds, and ended with a Seed and Food Fair festival in the communities who are using agroecology practices.

We were joined by Biowatch/Seed and Knowledge Initiative (SKI) from South Africa, Jeunes Volontaires pour l’Environnement (JVE) from Togo, Maendeleo Endelevu Action Program (MEAP) from Kenya, and Tanzania Alliance for Biodiversity (TABIO). Members of the ABN Secretariat were also there to help facilitate the process. The local participants were farmers, youth, local leaders, and civil society organizations from Bugesera, Muhanga and Ruhango, the three districts where we are implementing the project.

Hosting the workshop in Rwanda provided an opportunity for us to share the experiences that we have had as a nation with our partners. On the first day of the workshop, we arranged a visit to the Kigali Genocide Memorial and the Campaign Against Genocide Museum where both local and foreign participants were shown how the 1994 Genocide against the Tutsis was planned, executed, and brought to an end.

After the visit, we held a reflection dialogue. Guests appreciated the trip to both historical sites as it linked them to the historical background of the Rwandan communities they were about to engage with in the coming days. Participants reflected on the effects of the genocide on Nature because human beings were not the only ones who suffered from the genocide. An exhaustive study on how the genocide affected biodiversity and Nature was recommended.

On the second day, we had an inception meeting led by Simon Mitambo, from the ABN Secretariat. He presented on the objectives and vision of the project. The methodology and approach of the ABN in implementing its projects was laid out. Each partner was invited to present on their experience and the activities carried out in their countries. We found that all partners are working to strengthen agroecological practices and food sovereignty through connecting seeds with culture and Nature.

Farmer communities were the focus of the third day. Community dialogue training on Nature took place at the grassroots level. In these dialogues, the ABN methodology was highlighted as an approach to revive agroecological practices within communities and motivate farmers to value their integrated livelihood systems. This includes indigenous science, practices, innovation and spirituality all involved in agroecology. This helps to provide the foundation on which agroecology can grow.

Mitambo explained how to facilitate community dialogues and interactions using mysticas (a practice of taking time to connect with Nature as a group), storytelling, group discussions, plenary reflections and knowledge-exchange with farmers.

Sharing through storytelling
Another one of ABN’s approaches shared during the week was the use of storytelling. Two stories were told, one by Karangathi Njoroge from MEAP, Kenya, about the experience of communities living in the Amazon forest who lost their original culture through modern education that was imposed on them. The second story was told by Dennis Tabaro from AFRICE, Uganda, about the community of Bagungu in Western Uganda who lived near Lake Albert and engaged in fishing and farming. When their government discovered oil in the area, they paid off the community members to leave so that they could begin to extract it.

“Some of the communities moved to the town where they ate the money until it finished, others were introduced to the biochemical farming technologies because they were told that their land was no longer yielding. Some people, especially elders, started suffering from new food and developed seeds.”

The stories helped participants open up and reflect on their own contexts, where modern agriculture is playing a critical role in the extinction of indigenous seeds and biodiversity, as well as land degradation using chemicals. Modern agriculture also has an impact on culture, food sovereignty, health, climate change issues and the disconnection of people with Nature.

Closing with a Seed Fair
The last day of the forum was a Seed Fair in which a wide variety of indigenous seeds and plants was exhibited. Among the seeds presented were sorghum, millet, beans and groundnuts. Elders shared knowledge with young people and reflected on the role of each as food, as medication for people and for domestic animals, and their connection with Rwandan culture. The Seed Fair was very successful because there was a lot of knowledge sharing, especially with the youth who were less informed about the indigenous seeds and their roles. The representatives of local leaders also appreciated the event and said that the approach will help to sustain the conservation of Nature and maintain community welfare.

In conclusion
These interactions between our partners and the communities we work with gave us a better understanding of the connection between seeds, Nature and culture, and helped us explore how this relationship can save the planet from collective issues of climate change.

Working with the ABN has played a vital role in the development of GER in empowering the communities we work with, and it is bringing positive changes. Agroecological practices are proving to be a sustainable solution to the effects of climate change, enhanced through community knowledge exchange. 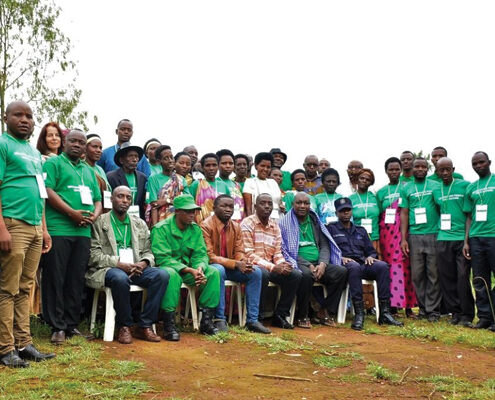 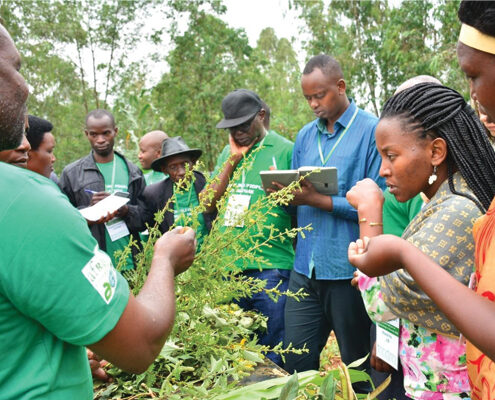 Exploring the breakdown of our relationship with nature
Scroll to top