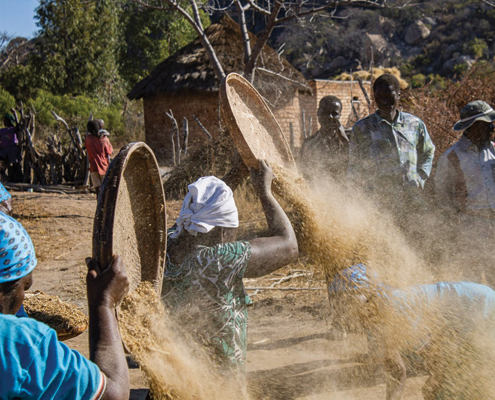 The world celebrates the 50th Anniversary of Earth Day on 22 April. It’s an important day globally, providing an opportunity to raise global public awareness of the challenges to the well-being of the planet and all the life it supports. This year’s theme is “Climate Action”, which is a call for global action as the climate change crises get us to a tipping point. Climate change stands as the biggest threat to the future of humanity and the life-support systems that make our world habitable. We can all rise up in a united call for creativity, innovations, requiring ambitious and brave approaches, to seize the opportunity for zero-carbon to protect and heal our ailing planet. At the African Biodiversity Network (ABN), we have been piloting diverse approaches for working with communities on seeds and ecological governance systems to enhance both community and Earth resilience. One organisation which has taken the lead in working with these methodologies is our partner EarthLore Foundation in South Africa. With a vision for a future in which humans are living in a respectful, just and reciprocal relationship with each other and the rest of the Earth community, EarthLore has been working with community seeds, both in South Africa and Zimbabwe, to build community and ecosystem resilience in the wake of climate crises.

EarthLore’s Director METHOD GUNDIDZA explains his organisation’s approach in the face of this crisis.

Seed lies at the heart of our agricultural and food systems. The story we know of the diverse cultural food from around our African continent is that, in most African traditions, seed is largely cultivated by women to feed their families and provide for community livelihoods. The diversity of seed cultivated enabled communities to respond to climate change and maintain the resilience of their food systems. These seeds and the related knowledge about them, have been passed on from one generation to the next.

The heart of EarthLore’s work is to accompany communities in their journey of reviving their indigenous knowledge systems and practices, and their community ecological governance systems. This encompasses revival of traditional seed diversity and farming systems and customary laws to protect their ancestral lands and Sacred Natural Sites (SNS). In most communities, agricultural practices have been severely compromised over the years and reconnecting with their roots is becoming a priority for them when they realise what has been lost.

Community dialogues are the foundation of EarthLore’s methodology and provide a space for knowledgeable elders, mainly women, to share their memory and knowledge with the community. As their memory comes back, stimulated through the dialogues, so does the picture of how the community used to live – the diversity of seeds the women used to cultivate and their different uses and nutritional and cultural values; the sacred natural sites and the various ritual ceremonies that were carried out in the past – when and by whom, for what reason.  Through this process of rebuilding a connection and an understanding of their traditional knowledge and practices, the communities are able to see what has changed and why. What they have lost and what they want to bring back and the means to do so.

EarthLore supports communities in this process to strengthen community practices, focusing on traditional governance and agricultural systems to ensure seed and food sovereignty and community control over their SNS, invariably encompassing important ecosystems, and their ancestral lands/territories.

The activities build on each other, beginning with small local community dialogues with elders, traditional leaders and young people, to revive indigenous knowledge systems (IKS) and identify particular problems in the community and communal solutions. The dialogues lead to improved social cohesion and increased confidence, particularly for women leaders as their roles and responsibilities, as spiritual leaders and keepers of seed and life, are revived.

When a community identifies seeds that have been lost, they are invariably inspired to find someone who might have them and be prepared to share them so that they can be propagated and distributed widely within and outside the community.

Some revived seeds might be associated with rituals that have specific significance for a SNS and thus they, bulk them up. The revival of knowledge and practices go hand in hand.

Peer learning within and between communities is a very potent way to learn from and challenge each other. This also builds solidarity and confidence as farmers feel they are not alone in charting this path. They have been told for decades that their traditions are backward, that their seeds are not good, that women are traditionally subordinate to men, that their SNS are outmoded beliefs.  The dialogues reveal another reality.  And they encourage each other by cross referencing what they have rediscovered, verifying a common bio-cultural and spiritual worldview.

The process of remembering takes time, often several years, to gather information and to reweave the basket of life that holds the community together. Once the communities feel that they have revived a clear picture of their knowledge practices and governance systems – then eco-cultural mapping can take place to begin to map the community’s territories and Sacred Natural Sites (SNS). By bringing together all members of the communities who have been doing this work, they are able to draw a map of the whole area in which they live, as it used to be – the mountains and rivers, the homesteads and farming areas, the fields and wild places and the SNS. Once they have completed the ancestral map, this serves as a visible record of the original order of their land/territory.

The next step is to map the present. The contrast between what the territory was like in the past and its present state is a shocking moment. This is when communities become aware of what has been lost. They are able to see the current disorder and destruction in contrast to the beauty of the past. Deep sadness and regret descends on them and they want to restore what has been lost. This provides the impetus for them to draw their future map. Initially they want everything to be as it was before but this is not possible and so eventually they turn their attention to what it is that can be restored to their land and their farming systems, and how to strengthen their compliance with their customary laws to ensure their SNS recover and are properly protected into the future.

In the next phase, paralegal training can begin, where communities explore how they can affirm and gain formal recognition for their community ecological governance systems, customary laws, SNS as no-go areas, traditional seed diversity and food sovereignty, their constitutional rights and how they can exercise their rights and responsibilities.  This aligns with the African Commission’s resolution 372, passed in 2017, that calls for African governments to recognize Sacred Sites and associated human rights and cultural practices and governance systems. EarthLore contributed to this resolution.

As communities become increasingly confident in themselves about who they are and what is meaningful and important for them, they become stronger and able to advocate for their priorities and for what they clearly do not want. From this position they are able to participate meaningfully in policy influencing e.g. mining, tourism, industrial agriculture projects, including exotic plantations.  EarthLore provides accompaniment and support as the need arises.

The basic premise guiding our work and the preparation and implementation of projects is that traditional communities have the knowledge and systems for strong local governance and sustainable livelihoods, having evolved them over generations. It is through recognizing, respecting and working with this knowledge that significant and sustainable work can be done with and in the community, and significant healing of the planet Earth can be realised.

Method’s article was first published in March 2020 by the Catholic Committee Against Hunger & for Development (CCFD). https://ccfd-terresolidaire.org/

All photographs on this page were taken by Rob Symons. 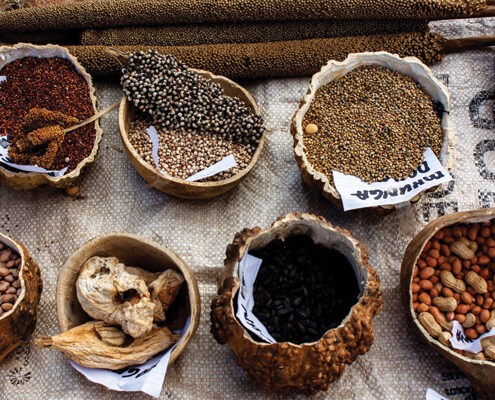 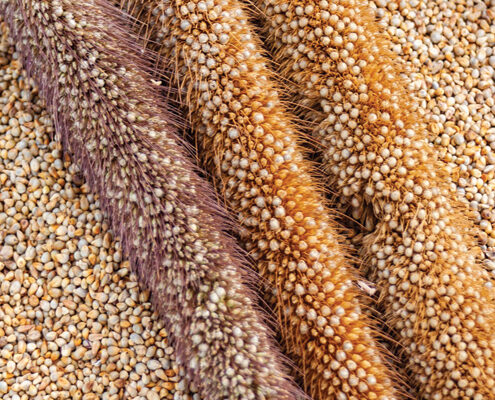 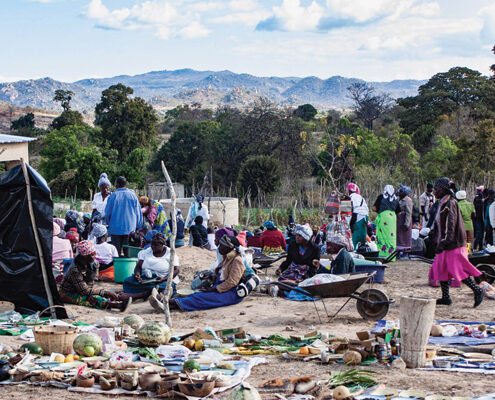 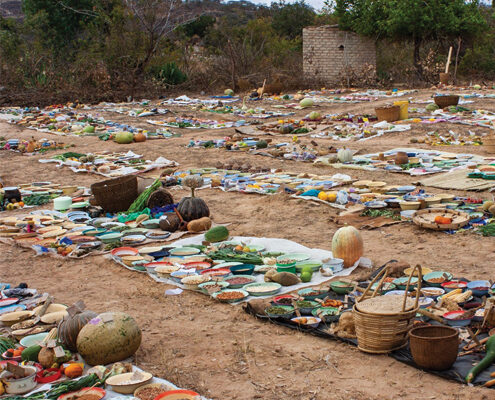 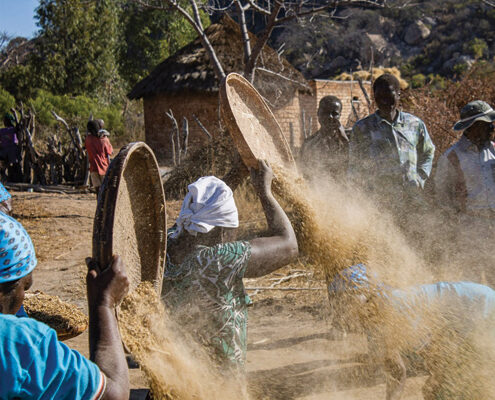 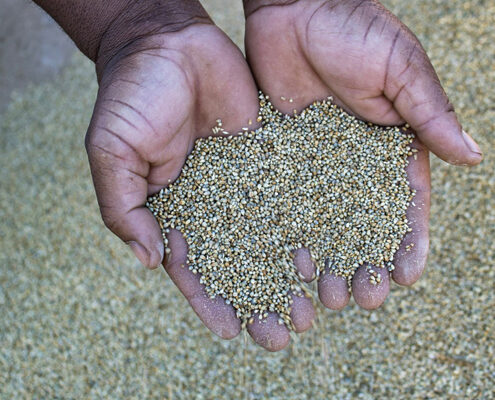