You are here: Home1 / NEWS2 / Seed, food & festivities in Zimbabwe 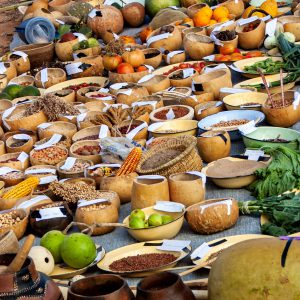 “Three days, three different days but everything is connected. The second day was really strong as a farmer’s day. It was important for me to see the dimension. And today? You can see some of yesterday. The farmers are here, but with a different set up. This is like a society that puts the farmer at the centre. Everything that you see is connected with the soil, with seed, with energy, with environment, with Nature.”

So said Mere Jah speaking on the third day of the 7th Annual Good Food Festival that took place earlier this month [September] in Zimbabwe’s capital of Harare. Also a member of the ABN’s board, Mere Jah represented one of three ABN partners at the festival, she herself travelling from Benin in West Africa to do so. This exciting 3-day event celebrates the diversity of seed in Zimbabwe and highlights the importance of organic and traditional foods.

This year, running under the theme Promoting consumption and marketing of healthy oils from Zimbabwean Traditional seeds, the event started with a day of farmer dialogues and marketing opportunities. This was followed by a day dedicated to seeds. 100 farmers working through 47 organisations exhibited their seeds from each of the ten provinces of Zimbabwe, making it a truly national event. Amongst these were farmers working with ABN partners EarthLore from Bikita and CELUCT from the eastern district of Chimanimani, the latter exhibiting despite the difficulties that Cyclone Idai brought earlier in the year. Mere Jah, director of ABN partner CEVASTE also took part in the event’s activities, as part of an ABN project funded by Bread for the World- which is aiming to strengthen community seed sovereignty and revival of farmers’ seed diversity for food sovereignty and sustainable livelihoods in Africa. “I am so surprised by how many women there are, the majority are women and they are all very keen to talk,” observed Mere Jah, of the participating farmers.

On the third day of the festival, the public joined in the festivities. Twelve stalls formed a veritable food court, with deep fried sadza balls being served alongside Ethiopian fare and more traditional Zimbabwean food. 53 different stallholders filled the market section with appropriate technology including: solar dryers, livestock, research/universities, SMEs and 18 farmer stalls. The organisers estimate that there were around 2,500 visitors to the festival, which took place as usual in Harare’s Botanical Gardens, only a stone’s throw from the city centre.

“This [festival] will give us motivation and energy to work even stronger. This exchange is important. You can explain but to see…who feels it knows it! I say congratulations to those who received the concept and are making it happen,” smiled Mere Jah. “I would love to come again.”

The Harare festival followed hard on the heels of another Seed Fair that took place further south in the district of Bikita in August. This Seed Fair was organised by EarthLore in partnership with ZimSOFF, the Zimbabwe Small Holder Organic Farmers Forum which is also very active in the area. Under the theme Our own Traditional and Local Seeds provide better Nutrition and are Resilient to Climate Change, more than 300 farmers exhibited, with over 1,000 visitors attending. Farmers came from Chimanimani, Shashe, Zvishavane, Gutu and Masvingo districts and even South Africa to take part in what proved to be a great opportunity for sharing seeds and knowledge.

ABN’s General Coordinator Fassil Gebeyu travelled from Ethiopia to join in the two-day fair as part of an M&E trip for the SEWOH project. “As I walked around the fair, farmers told me about the benefits they are getting from their revived seed diversities,” tells Fassil, “compared to their practice of growing few crops mainly maize before the SEWOH project was introduced.” Now in its third year, he observed that the fair is becoming a place of interaction as well as a place of economic gain for farmers as they also sell their seeds for money or exchange with goods.

He also observed that the organisers give awards to farmers through a competition to encourage them to grow many seed diversities each year. “I talked to farmers who were not winners about their feelings in relation to the competition. They said that the competition makes them encouraged to grow more seeds and become a winner next year.”