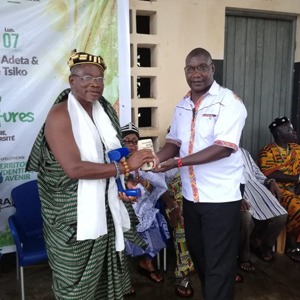 Arrival at Lome city in Togo
As this was my first time in Togo, I landed with great excitement and victory! The place was warmly calm with some coastal heat. Although I have travelled extensively in many African countries, Togo felt special.

We were received at the airport by Luttah, a Program Officer with Young Volunteers for Environment (JVE). We drove to the hotel; a stone’s throw away from the airport. I had a great shower in the salty coastal water.
The following day we woke up to a three-hour journey drive to the South. We were a team of ten international participants from the African Biodiversity Network (ABN); hailing from Kenya, Ethiopia, Rwanda, Zambia, Ghana, Burkina Faso, Niger, Benin and, of course, the host Togo. We were gathering for the First Edition of the Agro Bio-Cultural (ABC) Festival organised by JVE.

JVE is one of the ABN’s oldest partners, the evolution of its work was inspired by ABN processes. JVE’s director, Sena Alouka, met Dr. Million Belay early 2000 in Ethiopia. Million was working with ABN as a Thematic Coordinator for Culture and Biodiversity (CB). At this meeting, Alouka received the key to great work he was doing in Togo and internationally. This is how infectious the work of the ABN can be to individuals. Belay himself had experienced the ABN transformative processes. He went “back to roots” to be an agent of change with some communities in Ethiopia. He walked a journey of transformation with a community reviving and revitalising indigenous and local seeds and related community ecological governance and practices. Alouka too caught the fire and it has spread like bush fire.

Greeting the ‘promised land’ of Kpele-Tsiko
We arrived at Kpele-Tsiko village and were well received by a jubilant team of young people led by Alouka. We were treated to a traditional dance before a meal of yams, fish, wild vegetables and millet meal. It was relaxing to immerse ourselves into this new culture from this corner of Africa. Children were swift in dancing their traditional kwass dance for us. Their mothers too demonstrated great art of dancing, you could think that these people have no bones! They are healthy and admirable in the way they moved their chests and shoulders. I have never come across this kind of people before. Above all they seemed very resilient to their situations. When not dancing, the children played somersaults and all manner of things. I found them to be very strong and vibrant. Quite often they fell and no one cried; instead, they laughed and moved on. I wished to remain with them whole night; they are a blessed lot.
With its diversity of foods and biodiversity, Kpele-Tsiko is a very rich village situated in the mountains.

The following day we took a walk to visit a traditional Chief’s Palace. There we bowed with great respect to greet the Chief. Here the chief does not speak; instead, his assistant does the speaking lest the Chief makes human mistakes. This is where we got to learn about the meaning of the village – Tsiko, meaning “those who fetch water”. Water is an important element of Nature in this community.
The community was very happy about the festival. They expressed their satisfaction with how the festival is giving the community a visibility at the international level. They said that the festival has been presenting the young people with an opportunity to learn about their culture. They say that the main change they have been experiencing is erratic rainfall. The community complained that the weather patterns have changed greatly. This was making it difficult to predict weather patterns. One of the challenges they are facing with young people is that young people are not very keen to work the land. Most of them have gone into motorcycle transport business because of the quick money in it. The Fulani pastoralists from Nigeria were too a big threat to the Kpele-Tsiko community farming system; Fulani pastoralists destroy their crops with animals as they graze, they use money to corrupt their way so that the Togo government does not hold them accountable for the damages caused. After the visit to the Chief, we took a walk to the Agroecology Centre, which JVE has set up with support from the local government, University of Lome and other stakeholders. Here we marked the event by planting indigenous and local tree seedlings.

Training of youth in green enterprise
The Kpelephonie 2019 Festival was organised in terms of learning modules. These modules included: agroecology, pottery, weaving, chocolate making, renewable energy, beading, traditional dancing, and cooking traditional dishes. There was a short training on how to produce bio-fertiliser known as Bocashi. This was facilitated by the Centre for Agroecology. Alongside this, there were motivational speakers for the youth. They included some of the renowned personalities from the community. They inspired the youth to nurture their dreams and purpose. The youth were encouraged to write their goals and objectives and cultivate faith and confidence in themselves and to never give up in their ventures.
We did the first module of the agro ecological session in nature. We went into the forest and sat close to a river. We had a discussion with young people on the difficulties they face in applying agroecology. The challenges ranged from; youth mindset that perceives agroecology as an ancient form of farming, lack of legal supportive framework, financial support, and lack of both technical and institutional support. The education system also does not offer any course on agroecology and the youth have no mentors in this field.
We also discussed the strategies to cushion the threats and challenges. These strategies ranged from; setting up models for reference like the Songai Centre in the Northern Benin, to raising awareness amongst the youth on the importance of agroecology and its opportunities, lobbying for the curriculum inclusion into the education system, writing up an agroecology manual for use by youth, linking agroecology with nutritional values and finding a transition in agroecology. It was observed that there is untapped potential within agroecology for the youth. What is needed is to be creative and to think outside the box. Young people presented their innovative enterprise ideas, the challenges they anticipated facing and the ideas for mitigation of the threats and risks.

The colourful launch of kpelephonie 2019 festival
The following day we had a march to the Prefecture/Governor’s offices where we were addressed by him before coming back to the venue of the festival launch. The launch event was well attended by traditional leadership of Togo, national and local government officials, the media, the general public and other dignitaries. The local government supported short week-long courses on agroecology for the youth including: pottery, weaving, bead work, cooking traditional dishes, dancing the traditional dances, making toffee and chocolate, and interior decorations. There were colourful songs and dances that defined the day as special. Yes, the day defined the future hope for Africa – of defining its connection to natural resources and cultural identity. The theme of Territory, Identity and the Future guided the opening of the festival. The issue of food sovereignty topped the day as the Minister for the Agriculture gave a speech on the need to restore food sovereignty.

Launching West Africa to sub-regional node
The ABN partners from West Africa – Benin, Burkina Faso, Ghana, Niger and Togo – had a one-day meeting to strategize on how to enhance networking and deepen experience sharing. This is an initiative that has come to be known as sub-regional nodes within the ABN. A sub-regional node is a cluster of partners which is able to share experiences. Such experiences include exchange of ideas and knowledge on farming, seeds and related cultural practices, and tools. It will also serve to create alliances at sub-regional levels. Using the opportunity of being in the same geo-climatic zones, partners pursue creative and cost-effective methodologies which connect members and maintain vibrant networking at the sub-regional level. Over the years of working with the ABN, some partners have built their capacity to host others from elsewhere and to share their story. They have thus become active learning centres. In the process of realisation of active learning centres, partners will keep supporting their communities through building a community of practice on Youth Culture and Biodiversity, Community Seed and Knowledge as well as Community Ecological Governance.
In the meeting, Luttah was elected the team leader for the West Africa node. She will be in-charge of setting up meetings and organizing online and physical logistics.

Conclusion
With its theme Territory, Identity and Future, the event stood to give the African continent hope. Faced with the challenge of low participation of the youth in the agroecology, the festival presented a week-long opportunity for similar engagement. There was an increased support and participation from local leaders and government authorities. This was demonstrated in the opening remarks that were delivered by the Prefecture of the area. He is a key player in the regional administrative functions. He beefed up the security to the event. The Prefecture allowed the use of their social amenities for the event. The West Africa sub-regional meeting was held in their hall. The community showed an increased level of self-organising. Community organised a series of meetings including the kakati fire retreat- a cultural ceremony of going round the village singing with flames of fire for blessing the territory.