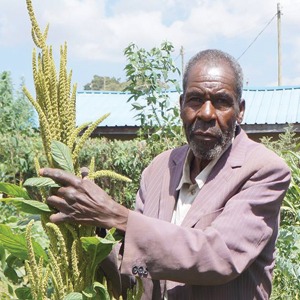 Peter Kamanda is an outgoing farmer with hands-on skills in farming practices. After he was involved in several trainings, he introduced growing of indigenous food crops on his farm and a variety of indigenous vegetables as well. Some of the crops include sweet potatoes, pumpkins, cassava, and sorghum. The vegetables are pig weed, black night shade, kale and nderema (Africa spinach). He also grows amaranth for vegetable and seed.

Vegetables on his farm are both for household consumption and sale. He generates significant income from sale of vegetables especially pig weeds throughout the year. Kale is the other vegetable that he grows for the market. He makes between three and five thousand shillings every month from the sale of vegetables.
Mr. Kamanda benefitted from agro-ecology training by MEAP and practises the agro-ecological agriculture on his farm. His farm is well organised, putting into consideration the needs of each crop. The different cropping systems ensures that he maximises on land utility, tap synergies between and among the crops in terms of pest and disease control, moisture retention and uptake by crops and allows his farm to produce throughout the year even during dry spells. He practises agro-forestry on his farm that incorporates tree and crop growing.
The system taps the synergies between trees and crops like pest control, nutrient cycle and soil fertility management, moisture management, wind control among others. This practice has enhanced production on his farm even during dry spells as the farm appears green and continues to produce.
Kamanda is an experienced farmer and has innovatively introduced crops that are rare to find in the locality like coffee and pineapples and fruits that give him high yields. Other farmers learn from his innovation. He got the coffee and pineapple seeds from his relative who lives in Kisii, Kenya.Due to his outgoing character and innovation, MEAP identified him as a contact farmer where MEAP organises training on his farm so that farmers are able to get hands-on experience