Blog - Latest News
You are here: Home1 / NEWS2 / KENYA HAS ALREADY HAD A GREEN REVOLUTION 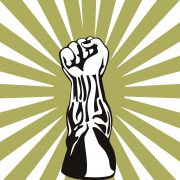 Forget trying to grow hybrid maize – Africa already has all the crops, storage systems and knowledge that it needs to grow itself out of poverty

After working for many years for Professor Wangari Maathai, and then with the African Biodiversity Network, Kenyan ecologist Gathuru Mburu wanted to share his learnings with his own local community who were suffering greatly from hunger. As Director of the Institute for Culture and Ecology (ICE), a small NGO based near Nairobi, Mburu spearheaded an intense programme with the communities to revive their traditional seed diversity and enhance food security using organic methods. Since the project began in 2008, two communities have raised their food security levels from 3 months to between 8-11 months; over 15 different indigenous vegetables have been reclaimed and 300 farmers have been trained in ecological and organic farming.

Laura Sevier: Africa is one of the continents most vulnerable to global warming. Are people in Kenya worried about climate change – and its impact on food security?

Gathuru Mburu: Yes, they are worried. In Kenya people have experienced it in a big, big way. If you take people back to their earliest memories they’ll give you a timeline of events of how the climate’s changing.

Some talk of crops like bananas that don’t do well in certain places – or if they do they’re short. Now you can grow a variety of species that only used to grow in warmer places – the area has become warmer. People here don’t relate to scientific facts but if you make them bring out their life experience of climate change, that’s what makes them take action.

LS: What can people do? What do you see as the solutions?

GM: The solutions exist. People need to realise that indigenous crops do well in times of extended drought. Storage is not as demanding (with root crops like yams there is storage underground – when you want to eat you just dig them up). With maize you can’t do that.

LS: On the website of the Alliance for a Green Revolution in Africa (AGRA), it says the aims are to boost food security and agricultural productivity through improved seeds, fertilisers and credit to small-scale farmers. Is the ‘Green Revolution’ the right approach for Africa?

GM: In Kenya we’ve already had a ‘Green Revolution’ – it’s been here in different intensities. AGRA is failing. We need to rejuvenate soils by removing chemicals completely or reducing them gradually so that small-scale farming is not chemically-based.

Farmers are taking loans, no one is addressing climate change, soils are ‘dead’ and people are starving. At the moment AGRA in Kenya is giving money to banks so they give credit for farmers for seeds and chemical supplies. Soils get killed or destroyed by many years of using chemical sprays and fertiliser. With dead soil, you can’t get a crop unless you use a lot of chemicals.

GM: Some farmers agree and have left that path and have moved towards organic ecological agriculture. Everybody knows that organic farming is capable of feeding Africa, including a UNEP study.

The problem is that the government in Kenya is not investing in this. It invests in GM because there is someone who can fund that. But it’s not initially community or people based research.

There is famine in Kenya and the government say it’s a question of improved seed, sprays. They don’t realise that by doing that it’s aggravating the situation.

The programmes we run are all organic, ecosystems based. We don’t use chemicals. We teach skills to enhance food production naturally using local materials. We’re not the only people doing this – it’s been done in the past and proved worthwhile.

LS: How have you helped these communities to become more food secure?

GM: One of the main areas we work in is community reconstruction. We are trying to bring a real sense of community back in order to improve livelihoods, ecosytems and environmental conservation. To strengthen it, we start from the household. We work with different households to address income and food security.

For instance in the Lari area people grow tea as a cash crop but the farm holdings are so small that there’s no land left to grow other crops. They depend on the proceeds from tea to buy food (where the bulk of their money goes); [pay for] schools (parents have to contribute towards secondary education) and medical bills.

There are now so many diseases that never used to be there. It’s coming from the way people are living, from diet and chemicals that go into growing food. For instance, we didn’t used to have diabetes. Now there’s so much affecting children as young as 10. It used to just be a disease of the old.

So all these bills are being met by meagre proceeds from tea the price of which is determined by the market. Everyone in Kenya is led to understand that if they have a cash crop they are better off – yet they live in poverty.

LS: What kinds of food do you encourage farmers to grow?

Everybody talks about maize as essential for food security including the government. So people were planting very small parts of their land with maize. Maize is a hybrid – it requires chemicals. The soil is dead already from overuse of chemical fertilisers so if you plant maize it fails which means everybody goes deeper and deeper into poverty.

A lot of the farming was being done by women; the men just did supervisory work. But we encouraged men, women and children to each have their job. It’s the only way to strengthen the household. If the households are strong then the community is strong.

And if you can address food at a household level all the rest of the money can go towards the bills.

LS: How successful has the project been?

GM: In two communities we’ve worked with it’s been very successful. Now we’re seeing the community more food secure – they’re still growing tea but now there’s a diversity of crops. We train some people on the ground and teach others through demonstration gardens. Then we go to another area.

We initially targeted eight households in one area – now many other farmers are learning from the target farms. In this way the project will become self-propelling.

THE QUEEN OF ARROW ROOTS
Scroll to top