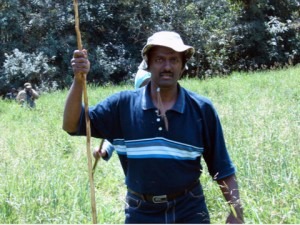 ‘The children are told to appreciate the western media, and to aspire to be an American’

Ethiopia’s culture and forests are gradually being eroded. The younger generation is taught to admire western consumer-driven culture and to ignore the traditional heritage of their birthplace.

As director of the Movement for Ecological Learning and Community Action (MELCA)Million Belay works with local communities to protect their local biodiversity and lifestyles.

Tom Levitt: What does ‘Melca’ mean?

Million Belay: Melca means a crossing point on a river and traditionally in the rural community when there is a problem in the community the women will go to this particular place and perform a ritual.

It also means connection because when the river is full people say, ‘where is the Melca or crossing point’.   So we use it symbolically to mean both these things – cultural disconnection.

TL: Why is biodiversity and culture important in Ethiopia?

MB: Culture and biodiversity connect at four levels. The first is in spiritual life of the people. There are some places that are not touched – sacred areas – because of the beliefs of the people and there are some plants used in ceremonies and rituals that if they disappear then those plants will also disappear as they lose value in people’s minds.   There is also linkage in what you know – mainly at a practical level in terms of agriculture, varieties of crops, medicinal crops – that is very much linked to culture.

Another linkage is language, if you don’t speak the language and you enter into a biodiverse area and people don’t talk to you and explain that biodiversity then that biodiversity does not have a meaning. So language is critical – it comes from the experience of the people.

Another linkage is knowledge, for example seed diversity. Some communities have more than 50 varieties of wheat seed so for me to go there I wouldn’t know all the varieties because I don’t have the knowledge about them so if they give them to me, in one or two generations they might disappear because I don’t have the culture of saving or using them.

This forms the foundation of Melca’s work. The belief that the bio-cultural diversity of the local community is very much critical for the identity of the people, for the next generation and also for development of the people.

TL: Why is the younger generation becoming disconnected from Ethiopia’s culture heritage?

MB: Because of formal education. When students come to school they will be educated in the modern education so the disconnection starts at school. It’s biology, English etc – the knowledge of the local community is not integrated.   That’s because it is a top down curriculum set up in the cities and probably copied from England. It does not reflect the local communities.

Most of things projected to you – movies, education and books – is western influenced. So you end up being more connected with the west than your own people.

The children don’t have time to go to nature. They are told to appreciate the western media and culture and they aspire to be an American. They are not connected to themselves.

Western media and culture is all about telling you to buy, buy, buy and then you still want to buy more. It also stigmatises and marginalises the knowledge of the local community – you are told it is bad and backward.

TL: You say farmers are opposed to the work of the Bill Gates Foundation, why is that?

MB: I am not saying that agricultural change is no good. The climate and environment is changing so people have to adapt. They cannot live as they were living hundreds of years ago.

But the problem comes with agri-business, where you produce for the market and where biodiversity is not important. It’s producing as much as you can and as much as the market wants.

The Bill Gates agri-initiatives and the western model of agriculture don’t have respect for the citizens or systems of the people. In every culture there is a system and seeds and a knowledge of a farming there and biodiversity.

They want to control the market so they control the seeds. You can’t store these seeds so the farmer has to go and buy from the company every year so from being independent he becomes dependent.   They also want to introduce agri-chemicals and what we are seeing is the soil dying.

The farmers say it is a ‘corrupted soil’ and they are not happy with Bill Gates Foundation because it is not respecting the culture and it is becoming an avenue for GM crops.

TL: But what if these GM crops improve production?

MB: By increasing production if you destroy the ecosystem and destroy the independence of the local communities and the diversity in the crops and seeds you have no idea how useful they will be for the country – it’s not going in the right direction.

We have another alternative. Any scientist will tell you that small agriculture produces more in total than a monoculture because it produces small but many varieties of crops and a system that doesn’t use the chemical fertilisers.

We have tried this alternative approach in communities in northern Ethiopia. Increasing compost production, a natural fertiliser, and working on soil conservation so the soil won’t be washed away and also increasing the biomass of the area by planting more things. This way you heal the ecosystem. Production has doubled. Farmers can plant what they want, the soil is healthy and they are getting money back for their produce.

TL: Can you see similarities between the re-connection movement in Ethiopia and the UK?

MB: Yes, I can see a huge shift here in England. When you speak with some people there are a lot of things in terms of culture that people are fighting to keep now. But there are differences. For example, in our cities in Ethiopia we don’t see things like Hampstead Heath or big parks because any big open spaces we build on – at least you have that chance in this country to walk outside in nature even in your big cities.

KENYA HAS ALREADY HAD A GREEN REVOLUTION
Scroll to top