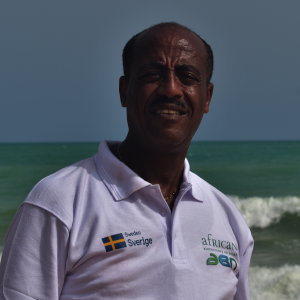 Dr. Fassil Gebeyehu Yelemtu (Ethiopia), is the General Coordinator of ABN. He leads a lean team at the ABN Secretariat to support running the network’s affairs daily.

Before joining the ABN Secretariat, Dr. Fassil served as a Team Leader of the Youth Development Programme in Ethiopia’s Institute for Sustainable Development (ISD). Besides the out-of-school youth, this school program with elementary and high school students introduced ideas about bicultural diversity. The program was implemented in various regions of Ethiopia and had exceptional value to youth. It connected them with their indigenous knowledge and built their capacity to perform better in their school education. At ISD, Dr. Fassil took an additional Head of Finance and Administration role in ISD Management.

As a social science researcher, he has polished skills in exploring complex data with many qualitative methodologies, including free listing, ID exercise, participant observations and various forms of structured besides unstructured interviews. He has long-term and progressive experience in the environment, community development, policy issues, ethnographic exploration and analysis of multiple aspects of contextual findings through coding and qualitative software such as Nvivo.

Dr. Fassil is a graduate of Earth Jurisprudence (EJ), a three-year course offered by the Gaia Foundation. EJ course equipped him with the philosophy of governance and Law, which recognizes that Earth is the primary source of Law that governs life. This philosophy promotes that the human community should comply with these laws for the well-being of the whole Earth Community and future generations.

His academic and practical engagements in life have led him to understand different forms of knowledge and inspired by the lawfulness of the Earth/Nature. Dr. Fassil is a Board Member of a child of ABN, the Alliance for Food Sovereignty in Africa (AFSA). He holds a Master’s Degree in Conservation and Tourism from the University of Kent and a Ph.D. in Anthropology Development from Durham University in the United Kingdom. Dr. Fassil is a dad to two daughters and a son. 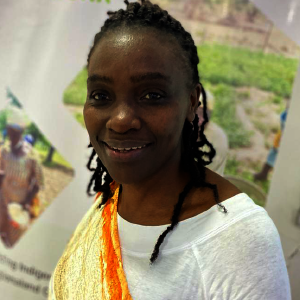 Jane Kinya (Kenya), Coordinates the Finance and Administrative functions of ABN. Since joining the ABN Secretariat in 2009, she has led organizational and network assessments, developed and overseen the implementation of comprehensive capacity development plans, set financial management and administration training manuals for programs and has an excellent appreciation of computerized financial management systems.

She has a working knowledge of donor reporting requirements after successfully managing multi-donor funds, including quality control, accountability and impacts. Over the years, Jane has developed a passion for program implementation functions. She derives joy interacting with the communities besides working with women farmers for seed sovereignty in Africa.

Jane has skills in Human Resources and Office Management. She has over fourteen years of experience in Finance, Administration and Consultancy Services at national and regional levels. She holds a Bachelor of Science in Mathematics from Kenyatta University besides Certification by Public Accountant (CPA) and Information Systems Auditor (CISA). She is a mum to many! 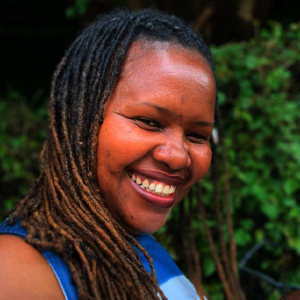 Venter Mwongera (Kenya), is an award-winning journalist in Science Communication. She is currently handling the Communication and Advocacy functions of the African Biodiversity Network and serves on various boards of media networks worldwide.

She began her science communication career more than 15 years ago. From 2008 until 2020, she worked at Internews as a Journalism Trainer, primarily building the capacity of practising journalists on conflict-sensitive reporting. She joined the International Association of Women in Radio and Television (IAWRT) to head the global Secretariat to implement, communicate and advocate for programmes on Climate Change, Gender Mainstreaming, and Journalists’ Rights, among other areas of focus. She spent many years at IAWRT leading the teams to tell the programmes’ stories through documentaries, radio, newspapers and digital platforms in 76 countries, 5 continents. After serving her full term, she moved on to Biovision Africa Trust at the International Centre of Insect Physiology and Ecology (ICIPE), where she was the Chief Editor of The Organic Farmer (TOF) and Mkulima Mbunifu (MkM) magazines, besides managing the two broad projects. She led the teams in Kenya and Tanzania to implement the projects and win awards of excellence in communicating ecologically sustainable agricultural farming methods in Africa.

Previously, Venter consulted for Deutsche Well (DW), Reuters, SciDev, Sub-Sahara Africa News Services, the Star Newspaper and Kenya’s National Broadcasting Corporation (KBC), where she began her career. Her beats were Technology, Human Rights, Ecologically Sustainable Agriculture, Climate Change, Gender Based Violence and Chest Health. Over her years telling science stories and advocating for journalists’ rights, her work took her from missing a missile in Iran, Iraq, Jordan, Palestine, Kuwait, Sudan and Morocco during the Arab spring to taking a kayak trip through the secluded backwaters of the Mississippi River for adventure after days of diving deep into the history of human rights activism archived in the National Civil Rights Museum in Memphis, Tennessee. She has published extensively in peer-reviewed journals on communicating ecologically sustainable agriculture.

She holds a Master of Science Communication, a bachelor’s degree in Journalism and Communication and is awaiting graduation with a Master of Art in Digital Journalism. She studied at universities such as Kenya Methodist, Jomo Kenyatta University of Agriculture and Technology (JKUAT), Graduate School of Media and Communication at Aga Khan University (GSMC-AKU) and AMREF International, where she extensively researched M&E approaches, programme design and implementation.

She has attended many professional courses by the Global Open Data for Agriculture and Nutrition (GODAN), IAWRT, Swiss Water Association (SWA), International Journalists Network (IJNet) and Knight Centre for the Journalism University of Texas Austin. She is among the Directors of Ololeshwa Community Outreach, Osupuko Association, TreeKenya Programme Advisor funded by Keystone Legacy, UK and a Co-Founder of Dissemination of Agricultural News in Africa. Her hobbies are mountaineering and Kundalini yoga. She is the mother of Mukami and Mwongera Jr. 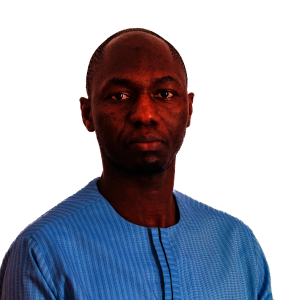 Abdel-Karim Ali Mahamane (Senegal) is an Agronomist Engineer and passionate about working with development programmes. He is the Regional Programme Coordinator (RPC) at the African Biodiversity Network, responsible for coordinating the Secretariat, including networking activities in countries where ABN has a presence.

He believes that building a team spirit is essential to achieve the organization’s objectives, overcome challenges and deliver in compliance with the ABN strategic plan and the requirements of funding partners. As RPC, he endeavours to be a part of the team dedicated to making ABN’s intervention relevant to the targeted communities.

At the beginning of his career, he was a part of the team that launched the national chapter of The Young Volunteers for the Environment (YVE) in Senegal. He gave a great deal in building partnerships and securing funds for the new chapter in the country. It was an exciting experience, which motivated him to be more interested in addressing development challenges.

As Food Security and WASH Officer within The Hunger Project (American NGO), Abdel worked with Farmers’ Organizations and put an eye on their needs and challenges. As part of my work, he facilitated their access to improved seeds and fertilizers while financing institutions. Later, he felt that it was time for me to grow, and the opportunity knocked at my door to manage an EU-funded project dealing with Youth and Media in the governance of the environment. Panos Institute West Africa coordinated this project (PIWa), where he spent nine months before taking the role of Sub-Regional Coordinator within the Prolinnova network for Western and Central Africa. During the two years, he coordinated the regionalization processes under the subregion, assisting countries in implementing projects funded under the umbrella of Prolinnova and resources mobilization, policy dialogue and advocacy besides networking and documentation.

Abdel holds an MBA in Programmes and Projects management and a Diploma in Agronomy Engineering, besides certificates in resource mobilization (how to connect with donors), grant management and greening economies in Africa through public policies.  He is an alumna of the University of Thiès in Senegal and CESAG (French acronym for African Center of High Studies in Management).

Abdel is driven by passion in all aspects of his life. He knows when he reaches his limits and how to ask for assistance from the team. He is a great team player and believes in the positive energy of teams. He likes reading novels or magazines and is a published novelist when not at work. He enjoys watching movies like comedy or thrillers and cooking since he loves good food and loves to cook it.

Hannah Kigamba (Kenya), handles the Monitoring and Evaluation functions of ABN, ensuring the programme progress is aligned to the network’s philosophy and keeping track of achieving the ABN’s agreements with the various financing partners.

Hannah believes in proper planning and strategic execution plans to feed into a result-oriented design which she holds firm. As a development practitioner passionate about working with communities, she sees that networking achieves sustainable impacts. ABN provides a platform for African organizations and communities to network, learn and make significant impacts, an approach that drew Hannah to join ABN.

She is self-motivated, a good communicator and a team player. Experienced in handling diverse aspects of project management for 10 years, she has dealt with proposal development, implementation and M&E besides project reporting. Hannah has been a part of a team designing community projects, seeing the transformation and inclusion of women and youth in community projects to inspire sustainable development.

She holds a Bachelor’s degree in Development Studies from Mount Kenya University (MKU) and a diploma in community development and social work with several professional short courses with the main focus on M&E. Hannah is results-oriented, pushes herself to the limit and believes each team player should aspire to do the same for the teamwork to thrive and achieve the organizational goals. The saying inspires her, “We can only go far if we go together.”

During her free time, Hannah enjoys spending time with her family, especially her son and listening to music from her community. 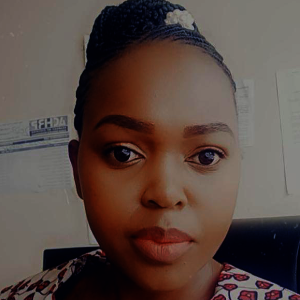 Janet Taabu Mwikya (Kenya) is the ABN Administrator. She has a background in Human Resources Management from the Technical University of Kenya (TUK) with skills and knowledge in finance & admin and Computer Maintenance and Repairs. She has an experience in Administrative Management of more than seven years. She is a Certified Public Accountant (CPA, part II) and continuing to learn accounting to refine her skills in this area further. Janet easily adapts to different cultures; hence she interacts with individuals and partners freely. Her passion for culture and traditions has seen her working with the youth on various levels. She is the former Country representative for the International Youth Diplomacy Conference (IYDC) 2020-2021. Her hobbies are cooking, travelling and listening to music, besides spending time with her family.