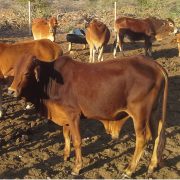 Back in the day, a hunters could never shoot an animal while it was mating; he had to wait until the animals finished mating in order to try his luck, kill a suckling animal either alone or together with a young one as this was an abomination to the family of the hunter and the larger community.

The value of the Indigenous Animal Seed in Tharaka
The Tharaka ceremonies (circumcision, dowry payment, rain offering, land purification) require animal blood. Specifically, during the circumcision ceremony; the circumciser, friends and relatives of the one getting circumcises as well as the one getting circumcised was given a goat during the ceremony. This was a mandatory requirement, without which, the ceremony would be considered incomplete. The men received a goat referred to as Ndumo and just like all the other goats given, it was an indigenous breed.

At the dowry payment, the man is required to kill a goat to mark the process and it is done at the girl’s home. In the place where a full goat is not killed, a goat of a choice has to have one of its ear’s cut (at the edge) and to mark the process. This process id called Kuuragiira Mburi.

Challenges facing the animal seed
Non indigenous livestock varieties commonly referred to as “grade” animals were introduced in Kenya during colonisation and after independence; it became clear that the government agricultural policy favoured grade animals over indigenous varieties. These animals were touted as being high milk producers, maturing faster, needing very little resources in addition giving to better quality meat. This was and still is the same narrative that has been spread not only in Tharaka but throughout Africa, completely disregarding the fact that in many areas of the continent, the weather is extremely brutal, with Tharaka as an example being a generally dry area, and that in order for any animal to survive, it would have to be very well adapted to the climate – including pests and diseases.

Grade animals have been a complete disaster in Tharaka and the farmers who made huge investments in them, hoping for great returns, have suffered huge losses and have had to go back to raising indigenous varieties of livestock; which are well adapted to the local conditions in Tharaka, thus ensuring food security in terms of providing local dietary needs for meat and milk, financial benefits when sold an/or exchanged in local farmer markets. More importantly, the indeginous breeds fulfill the cultural requirements required during different traditional ceremonies.

As a result of the lack of support by from the government for keeping of these indigenous varieties; there is intense pressure to do away with these animals with claims that there is no space and pasture land for their upkeep. In addition, land degradation in an already dry areas is a huge problem and the best available land is allocated to conventional farming methods at the expense of pastoralism in Tharaka. A balance needs to be struck between farming and priority must be given to agro-ecology rather than conventional farming, and livestock keeping. There should be increased efforts to reclaim grazing lands so as to enable farmers to keep more animals.

RIDEP’s efforts to support the reclaiming of Indigenous Livestock Seed in Tharaka
With consideration to the issues raises and other challenges facing indigenous livestock keeping in Tharaka, RIDEP and groups of farming communities are working to protect this important seed biodiversity through an initiative learnt during the networking forums at the African Biodiversity Network (ABN), which is the Holistic Livestock and Land Management Practice (HLLM). This approach mainly employs use of animals to reclaim degraded land and thus bring back lost pastureland.

RIDEP is also working with local communities in Tharaka Nithi County to promote food festivals and revive dying cultural ceremonies as well as aggressively promoting traditional practices that are still observed within the Tharaka community. This is done via integration of intergenerational learning, focusing on one of ABN’s thematic focus areas, Youth, Culture and Biodiversity (YCB); in all the current projects and programmes within the community. The elders play a central role in these ceremonies and festivities and in line with the Tharaka culture, indigenous animal breeds and indigenous food and seed varieties are the only ones that can be used as they have deeply symbolic meaning to the community.

Zachary Chabari was born, raised and educated in Tharaka-Nithi County, where he still lives. He is the Founder and Director of Rural Initiatives Development Programme (RIDEP), an organisation he founded in 2006. He has over 20 years experience in field of community development, focusing mainly on sustainable farming and value market chains for small-holder farmers.