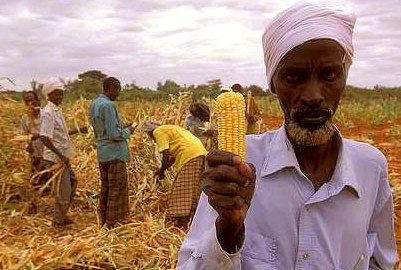 The Kenyan government in June gave a go-ahead to the nation’s grain millers to import genetically modified maize from South Africa and Europe to ease the shortage of maize in the local market.

“We believe that we can feed our communities and this country with organic and agroecological farming practices that do not destroy, pollute and contaminate food, land and seeds,” said Gacheke Gachihi, coordinator of the Bunge La Mwananchi Social Movement.

The BBC first reported of the protests in this July 1, story, and has since gained momentum. The activists said there is a growing body of scientific evidence to show that genetically modified foods can cause serious damage to health, environment, food production and livelihood. They said for example, animal feeding
trials have shown damage to liver, kidney and pancreas, effecting on fertility and stomach bleeding.

They said some of the problematic environmental consequences of genetically modified foods include the development of insect resistant to the pesticides engineered into crops as well as the emergence of new and secondary pests destroying farmers’ crops forcing them to buy and use highly toxic pesticides.

The activists said hunger is not caused by under-production of food, but because people have no money to buy food and therefore the genetically modified maize may be as expensive and will not solve hunger problem.

“We want the government to protect the integrity of agroecological practices and farmer saved seed varieties by banning the introduction of genetically modified foods into Kenya,” the activists said in a joint statement.

Meanwhile, in America, Monsanto opened its newest corn breeding facility today in Othello, WA on Wednesday July 6. The new 15,000 square-foot facility, which employs five full-time and approximately 100 part-time and seasonal workers, is the first of its kind for Monsanto in the United States.

The breeding station will be devoted exclusively to using double haploid advanced breeding technology to help Monsanto’s breeders provide better corn seeds for farmers. Within the next 10 years, about 50 percent of new corn lines in North America will have gone through Othello.

In corn breeding, top-performing hybrid corn seed is developed by crossing – or breeding together – two genetically pure corn plants, which are called inbreds.

“The double haploid technology at this site accelerates corn breeding significantly by reducing the process time to about a third or a fourth of what it took us previously,” said Sam Eathington, Monsanto vice president of global plant breeding.

“As a company focused solely on agriculture, Monsanto is excited to reinvest in an important site like Othello with this advanced breeding capability.” http://www.newscastmedia.com/gmo-corn.html