With July’s Biennial Partner meeting in Nanyuki, Kenya successfully wrapped up until we meet again in 2019, this issue of the ABN Newsletter highlights the processes that participants followed to analyse and reflect upon the actions of the network over the last two years. The principles that were crafted back at the Biennial Partner meeting in 2015 have been a valuable tool for assessing the progress of the network; they also worked on a personal level for participants. After all, the success of the network not only relies on engagement with it at an organisational level but lies at the feet of each individual that makes up the African Biodiversity Network (ABN). It is critical to understand the importance of the methodologies that the ABN encourages its partners to integrate into their daily operations and these principles guide that journey. 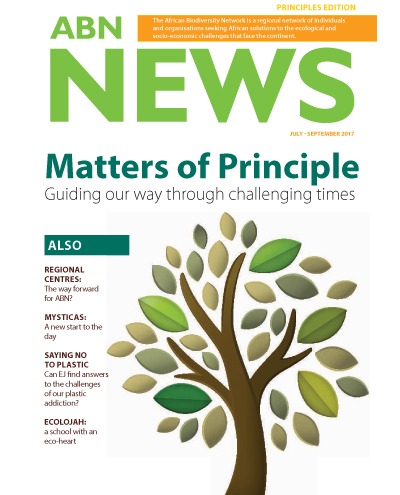 Saying NO to plastic

In August this year, Kenya passed a ban on the manufacture, use, importation and sale of plastic bags. The ban has been described as the world’s toughest, with a penalty of 4 years in jail or a Ksh4,000,000 (USD 40,000) fine. It is the third attempt to implement such a ban in the past 10 years, though previous bans have failed. Other African countries, such as Rwanda (2008), Eritrea (2005) and Mauritania (2013) have instituted similar national bans on non-biodegradable plastic bags, with varying degrees of success. Kenyan Environment Minister Judy Wakhungu told the BBC that, “Plastic bags now constitute the biggest challenge to solid waste management in Kenya. This has become our environmental nightmare that we must defeat by all means.” Her sentiments come at a time when an estimated 24 million plastic bags are used every month across the globe. Plastic pollution poses a near permanent contamination of the natural environment worldwide.

Plastic bags litter most roadsides in Kenya, clog sewers and streams, destroying marine life. Beaches are also seriously polluted. Often we experience floods in our towns and cities due to obstruction of our sewers by plastic bags. Animals also graze on the rubbish; the United Nations Environment Programme quotes a shocking number of polythene bags being pulled out of livestock in Nairobi’s abattoirs – as many as 20 bags per cow – raising fears of plastic contamination in beef.